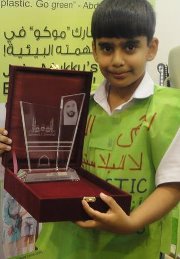 Abdul Muqeet, also known as the Paper Bag Boy, has risen from being just another ordinary student to an extra-ordinary environmentalist. At just ten years old, Abdul Muqeet has demonstrated his commitment to saving the environment in United Arab Emirates and elsewhere. Inspired by the 2010 campaign “UAE Free of Plastic Bags”, Abdul Muqeet, a student of Standard V at Abu Dhabi Indian School, applied his own initiative and imagination to create 100% recycled carry bags using discarded newspapers. He then set out to distribute these bags in Abu Dhabi, replacing plastic bags that take hundreds of years to degrade biologically. The bags were lovingly named ‘Mukku bags’ and Abdul Muqeet became famous as the Paper Bag Boy.

Abdul Muqeet’s environmental initiative has catalyzed a much larger community campaign. During the first year, Abdul Muqeet created and donated more than 4,000 paper bags in Abu Dhabi. In addition, he has led workshops at schools, private companies and government entities, demonstrating how to create paper bags using old newspapers. His school along with a number of companies in Abu Dhabi adopted his idea by exchanging their plastic bags for paper bags.

Abdul Muqeet was one of the youngest recipients of Abu Dhabi Awards 2011, for his remarkable contribution to conserve environment. The awards were presented by General Sheikh Mohammad Bin Zayed Al Nahyan, Crown Prince of Abu Dhabi and Deputy Commander of the UAE Armed Forces. In 2011, Abdul Muqeet was selected to attend the United Nation’s Tunza conference in Indonesia where he demonstrated his commitment for a cleaner environment through his paper bag initiative. He is actively involved in spreading environmental awareness worldwide, especially UAE, India, USA and Indonesia. He has been remarkably supported by his parents and siblings throughout his truly inspiring environmental sojourn. Abdul Muqeet’s monumental achievements at such a tender age make him a torch-bearer of the global environmental movement, and should also inspire the young generation to protect the environment by implementing the concept of ‘Zero Waste’.