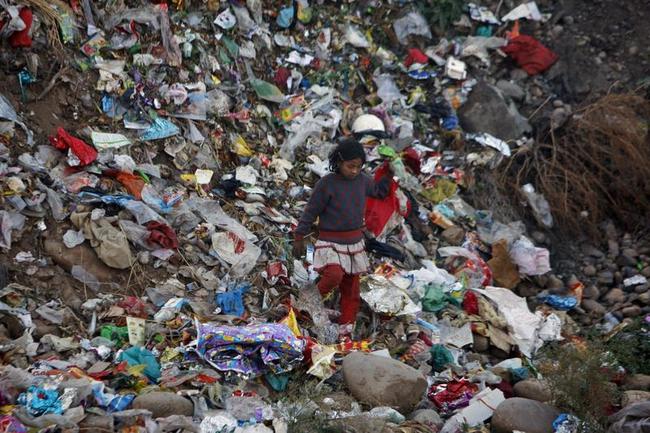 An American produce 2.1 kg of garbage per day against 0.6 kg for an Indian, according to a 2009 study by the National Sanitary and access to water-governmental organization, the CPHEEO (Central Public Health and Environmental Engineering Organization ). Yet the country with a total of 1.2 billion people takes the cake in terms of volume of trash produced annually. Alone, New Delhi, the capital would produce nearly 8,000 tons of waste per day. But how this developing country manages its waste?

In New Delhi, a slogan often appears “Clean Delhi, Green Delhi.” This campaign, launched in 2003 by the Indian government, was to make the Indian capital greener and more attractive for. Since then, despite large areas of green space in Delhi, the country still has some way to go regarding the “waste management”, the treatment of waste. 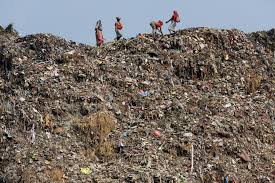 In India, there is nothing more normal than seeing onlookers get rid of their garbage on the ground or a driver who opens his window to throw his empty cigarette box. Cities in India are veritable giant landfills and there is not a shadow of a trash can on the horizon. And yet there exists a system of waste and even recycling

Ragpickers, first link in the chain

Men are appointed by the municipality to scan localized areas, to collect waste they deposit in the mini-landfills designed for this purpose. However, these areas can be so extensive that it is difficult to keep them clean. The mini-landfills are located all over the city, the street reeking with the smell of all the rotting garbage and forcing passersby to cover their noses. That’s where comes in the dressers, these men, who sort waste at mini-landfills.

At Hauz Khaz Village, a neighborhood in New Delhi, Dharampal has faded turban around the head and face, to protect it from the smell. At 35, the man appears twice. He is sweeping and cleaning up trash 10 times a day for 20 years, to 3000 rupees per month, or about 36 euros. He explained that the waste is used as fertilizer.

If Dharampal, works for the municipality, this is not the case for all the scavengers. Nakul for example, has worked for 10 years in an area of south Delhi. He claims to work for himself. He also picks up daily waste piled in dumpsters. For 1,000 rupees a month, or about 12 euros, it leads outside Delhi.

Ranjith Annepu, coordinator of WTERT – India and leading waste management researcher, says that for these people, often from villages, this work is all their lives, they cannot do anything else, they roam the streets in search of paper or plastic or metal they sell thereafter.

“India is a poor country, even if it develops. We must create a system where the workers have their place, a system that protects their livelihood and give them better working conditions. ”says Ranjith. “India and the countries of Latin America-are leaders in the organization of these informal workers, he added, cooperatives are created, but much remains to be done, it must be explained these dressers, their rights and the benefits they have to be together. “

If treating waste is a national problem, it is obvious that the solution is at the local level. For each city and region have their specificities and their corresponding solutions. For Ranjith Annepu, this also depends on the priority of each locality, “if the problem due to waste is important to solve the problem will be a priority. On the contrary, if one is not in a state of crisis, the search for a solution will be slower. “ The researcher also regrets the lack of continuity in environmental policy. “Every end of term, everything is at it again, according to the will more or less of the new municipality.”

Several companies and foundations, Indian or foreign, are trying to advance the system. Conserve India is an NGO that uses plastic bags, jeans, saris, jeans, belts, tires … to make bags brands sold worldwide. Created in 1998 by Anita and Shalabh Ahuja, the price of bags Conserve India is 20 to 50 euros. In France, twenty stores, including Altermundi, offer these bags. To do this, the Indian couple working with the garbage, they pay three times more to collect waste. The money they earn by selling their bags used for social projects, such as building a clinic and a school for employees.

BioEnergy Consult is an organization that seeks precisely to raise awareness of the importance of waste management. Its role is to advise and train clients all over the world, to inform them on sustainable development and on new techniques for treating waste as well as systems turning waste into energy. For Salman Zafar, CEO of the organization, the system of waste management in India has deteriorated in recent years due to rapid urbanization, increasing population, changing consumption patterns and scarcity of landfills.

“Existing landfills have reached saturation and the local or national authorities are struggling to find an effective strategy to overcome mountains of waste that accumulate in cities across the country.”

And there are solutions. Waste can indeed be converted into clean energy and fuel by a variety of technologies ranging from conventional combustion process to advanced thermal technologies. And individuals may also, at their level, participate in the movement for example using the biogas, produced from waste products in their cooking gas.

Because the flaws in the system of waste treatment are not without consequences: poor sanitation and diseases due to contaminated water are common, while the presence of stray animals attracted by food often leads to bite …. Worse still, the air became unbreathable in Delhi due to the burning of waste in open areas … so many alerts that are not heard, because “we ask people, often illiterate, worry for the environment when they are first employed to find shelter and food, “ concludes Ranjith Annepu.

Enough said. Everything remains to be done.

Sara Saidi
Journalist Jack-of-all-that restless. Fan of Lois and Clark and new media. JRI who can not let go of his pen (or keyboard). The protection of sources is a principle, an international goal. Speaks Farsi, English and Spanish; wanders between France, Spain and India ... waiting for Iran.

6 thoughts on “Trash Talk from India”