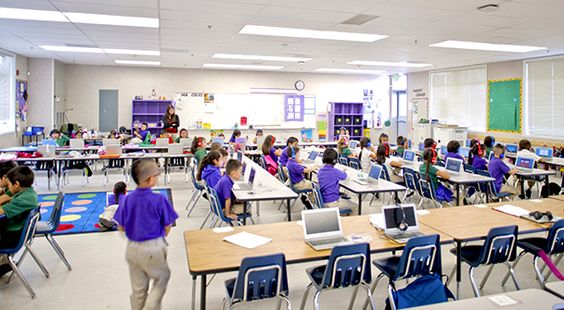 One of the great complications of the U.S. public education systems today is the lack of personal connection between the students and teachers. The metrics by which the students are measured for their proficiency and growth are two independent factors, but this is rarely given due treatment to secure the success and forward education of today’s youth. Rather, it’s all about meeting a quota, series of numbers or letter score, and newsflash: It’s not working.

Some states have begun drawing the line between proficiency and growth scores. The former measures whether a student is functioning within their expected range, which accounts for their grade and the relative standing between pupils; growth scores, however, show the actual amount of development that occurs between one point and the next. While the former isn’t worth ignoring in the big picture, the latter is being pulled front and center in more schools around the country in an effort to gauge just how much our children are actually absorbing.

Achieving a more tenable growth score isn’t a result of the tried and untrue “throw facts at the little ones and grade them on whoever regurgitates it most effectively on a paper test”. People as a whole, especially our children, are much more than robots with emotionless input-output capabilities; we think in three dimensions, so our educating entities should teach in the same dimensions to complement that. However, it’s thanks to this cookie-cutter attitude — a deficiency in our respect for who and what the young minds are — that many children miss the mark, or worse, drop out altogether.

Blasting Off with Rocketship Education

As a result of this inconsistency in the educational sphere, higher education can seem unattainable for kids in some communities and who walk from different upbringings with challenges of a different hue. This is the gap that Rocketship Education aims to close with their non-profit archipelago of K-5 schools that offer a degree of attainability toward college and university enrollment for those who would normally find themselves unable to reach it. Founded in 2006, Rocketship employs upwards of 1,000 staff members in their effort to elevate talented minds from the trenches of abject and circumstantially biased conditions to their rightful place in society.

Serving as a 501(c)(3) nonprofit corporation, this network aims to stitch up the differences between wealthier school districts and those that receive insufficient funding, and this is done by introducing a manageable education scaling setup to the lower-income systems that makes it possible for children in those schools to receive the treatment and recognition that children in more fortunate systems receive. Rocketship works hand-in-hand with parents to reinforce their children’s future and open the way to more fulfilling roles in society that suit their otherwise untapped passions and potential.

The corporation receives investments from supportive entities such as Peery Foundation, and most of Rocketship’s provisions take the form of college grants up to $100,000. They’ve also provided a “venture round” consisting of $3 million in donations — an impressive feat to be sure. Rocketship is an active contributor of higher education opportunities for children in impoverished school systems to this day, and eligible locations can be found all over the U.S. for those who are interested in their assistance.