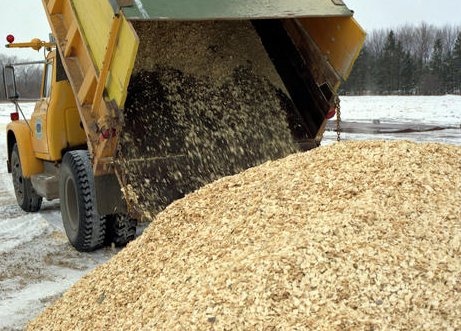 A wide range of woody biomass resources are available for conversion into renewable energy in natural forests, rural areas and cities. There are many ways to generate electricity from woody biomass using thermochemical pathway, including directly-fired or conventional steam approach, co-firing, pyrolysis and gasification.

Most of the woody biomass-to-energy plants use direct-fired system or conventional steam boiler, whereby biomass feedstock is directly burned to produce steam leading to generation of electricity. In a direct-fired system, biomass is fed from the bottom of the boiler and air is supplied at the base. Hot combustion gases are passed through a heat exchanger in which water is boiled to create steam.

Biomass is dried, sized into smaller pieces and then pelletized or briquetted before firing. Pelletization is a process of reducing the bulk volume of biomass feedstock by mechanical means to improve handling and combustion characteristics of biomass. Wood pellets are normally produced from dry industrial wood waste, as e.g. shavings, sawdust and sander dust. Pelletization results in:

The processed biomass is added to a furnace or a boiler to generate heat which is then run through a turbine which drives an electrical generator. The heat generated by the exothermic process of combustion to power the electric generator can also be used to regulate temperature of the plant and other buildings, making the whole process much more efficient.

Cogeneration of heat and electricity provides an economical option, particularly at sawmills or other sites where a source of biomass waste is already available. For example, wood waste is used to produce both electricity and steam at paper mills.

Co-firing is the simplest way to use biomass with energy systems based on fossil fuels. Small portions (upto 15%) of woody and herbaceous biomass such as poplar, willow and switch grass can be used as fuel in an existing coal-based power plant. Like coal, biomass is placed into the boilers and burned in such systems. The only cost associated with upgrading the system is incurred in buying a boiler capable of burning both the fuels, which is a more cost-effective than building a new plant.

The environmental benefits of adding biomass to coal includes decrease in nitrogen and sulphur oxides which are responsible for causing smog, acid rain and ozone pollution. In addition, relatively lower amount of carbon dioxide is released into the atmospheres. Co-firing provides a good platform for transition to more viable and sustainable renewable energy practices.

Pyrolysis offers a flexible and attractive way of converting solid biomass into an easily stored and transportable fuel, which can be successfully used for the production of heat, power and chemicals. In pyrolysis, biomass is subjected to high temperatures in the absence of oxygen resulting in the production of pyrolysis oil (or bio-oil), char or syngas which can then be used to generate electricity. The process transforms the biomass into high quality fuel without creating ash or energy directly. 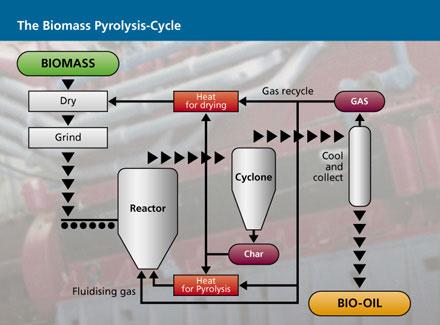 Wood residues, forest residues and bagasse are important short term feed materials for pyrolysis being aplenty, low-cost and good energy source.  Pyrolysis oil can offer major advantages over solid biomass and gasification due to the ease of handling, storage and combustion in an existing power station when special start-up procedures are not necessary.

Gasification processes convert biomass into combustible gases that ideally contain all the energy originally present in the biomass. In practice, conversion efficiencies ranging from 60% to 90% are achieved. Gasification processes can be either direct (using air or oxygen to generate heat through exothermic reactions) or indirect (transferring heat to the reactor from the outside). The gas can be burned to produce industrial or residential heat, to run engines for mechanical or electrical power, or to make synthetic fuels. 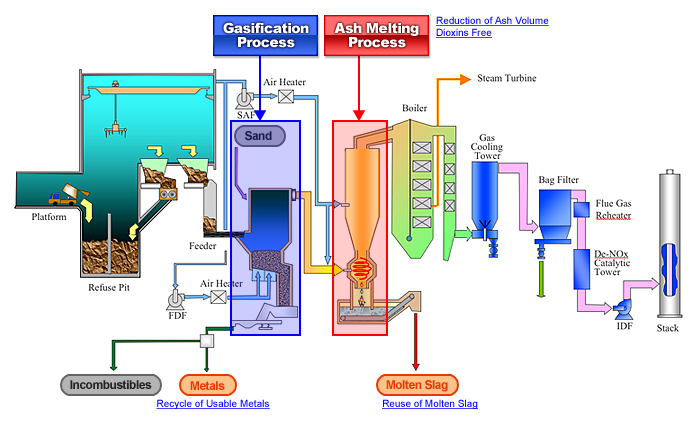 Biomass gasifiers are of two kinds – updraft and downdraft. In an updraft unit, biomass is fed in the top of the reactor and air is injected into the bottom of the fuel bed. The efficiency of updraft gasifiers ranges from 80 to 90 per cent on account of efficient counter-current heat exchange between the rising gases and descending solids.