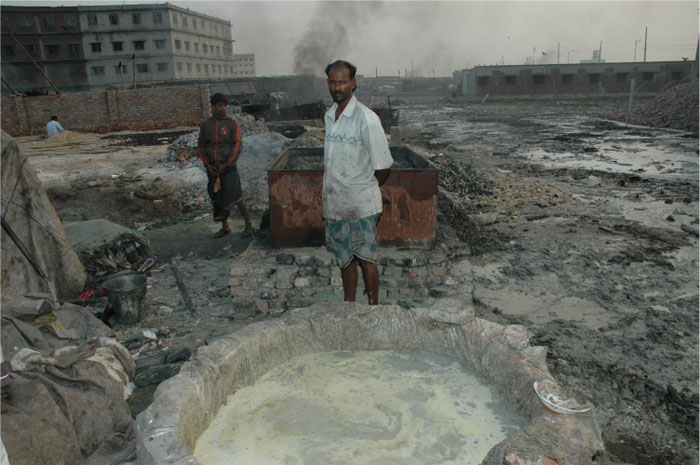 Wastes generated by the leather processing industries pose a major challenge to the environment. According to conservative estimates, about 600,000 tons per year of solid waste are generated worldwide by leather industry and approximately 40–50% of the hides are lost to shavings and trimmings.

Everyday a huge quantity of solid waste, including trimmings of finished leather, shaving dusts, hair, fleshing, trimming of raw hides and skins, are being produced from the industries. Chromium, sulphur, oils and noxious gas (methane, ammonia, and hydrogen sulphide) are the elements of liquid, gas and solid waste of tannery industries.

Gasification technology has the potential to provide significant cost benefits in terms of power generation and waste disposal, and increase sustainability within the leather industry. The gasification process converts any carbon-containing material into a combustible gas comprised primarily of carbon monoxide, hydrogen and methane, which can be used as a fuel to generate electricity and heat.

A wide range of tannery wastes can be macerated, flash dried, densified and gasified to generate a clean syngas for reuse in boilers or other Combined Heat and Power systems. As a result up to 70% of the intrinsic energy value of the waste can be recovered as syngas, with up to 60% of this being surplus to process drying requirements so can be recovered for on-site boiler or thermal energy recovery uses.

Tanneries generate considerable quantities of sludge, shavings, trimmings, hair, buffing dusts and other general wastes and can consist of up to 70% of hide weight processed. The gasification technology, by virtue of chemically reducing conditions, provides a viable alternative thermal treatment for Chrome containing materials, and generates a chrome (III) containing ash. This ash has significant commercial value as it can be reconstituted.

All of the wastes created by the tannery can be gasified following pre-treatment methods such as maceration, drying and subsequent densification or briquetting. A combined drying and gasification process could eliminate solid waste, whilst providing a combustible gas as a tax-exempt renewable energy source, which the tannery can directly reuse. Gasification trials have illustrated that up to 70% of the intrinsic energy value of the wastes currently disposed can be recovered as “synthesis gas” energy.

A proprietary technology has been in commercial operation at a tanyard on the West Coast of Norway since mid 2001. The process employs gasification-and-plasma-cracking and offer the capability of turning the tannery waste problem to a valorising source that may add values to the plant owner in terms of excessive energy and ferrochrome, a harmless alloy that is widely used by the metallurgical industry. The process leaves no ashes but a non-leaching slag that is useful for civil engineering works, and, hence, no residues for landfill disposal