To measure radiation, people use different varieties of detectors. Some devices are better suited for professionals. Others are popular among the general public: they are sold at an affordable price and even a newbie will understand how to use them in just a couple of minutes. Radiation detectors differ by the environment that they can work in, the size and transportability, the sensitive material, the type of signal and the type of radiation they can handle. In this article, we will explain the difference among several types of detectors in simple words.

A typical detector consists of two interconnected components. The first one contains sensitive material. When exposed to radiation, it experiences changes. The second component processes these changes and transforms them into signals that people can measure and interpret.

Classification by Type of Radiation

When selecting an appropriate device, you should first identify which type of radiation you need to measure.

Some detectors can handle several types of radiation — but others would cope with just one particular type. The latter are usually more accurate because they specialize in dealing with a certain type of particle. 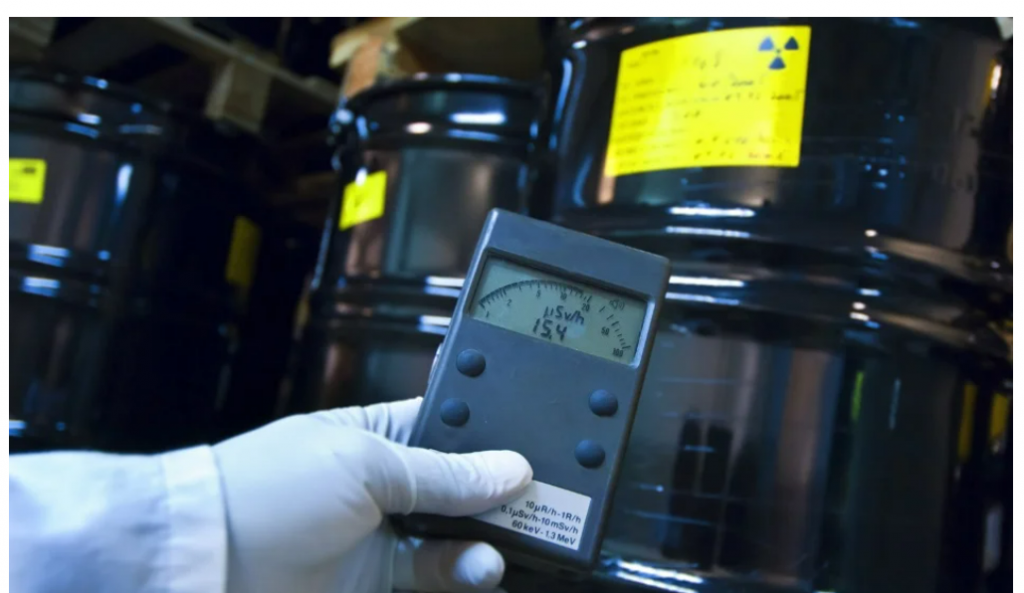 Plus, you should get to know whether the device is capable of working with a certain radioactive environment: gas, liquid or solid. In this aspect, detectors are normally not interchangeable.

Such devices are rather light and compact. However, their efficiency might be not sufficient for detecting certain types of radiation. Below, we will compare two types of devices used for general laboratory radioactive material survey.

It is good at detecting low-energy gamma radiation: Iron-59, Iodine-131, Iodine-125 or Chromium-51. But it might not be accurate enough when dealing with beta emitters, such as Sulfur-35, Chlorine-36, Phosphorus-33, Phosphorus-32, Carbon-14 or Hydrogen-3.

Just as the Nal Scintillator, this one might fail to properly detect Sulfur-35, Carbon-14 or Hydrogen-3 and other lower beta emitters. You should not rely on it when trying to detect Iodine-131, Iodine-125 or other low-energy gamma emitters either.

But if you need to work with medium- to high-energy beta emitters, the Geiger-Mueller detector should be your tool of choice. It will precisely detect Calcium-45, Chlorine-36, Phosphorus-33 or Phosphorus-32. It should cope with the higher and medium spectrum of gamma and alpha radiation as well.

In this category, we will focus on just one device, Liquid Scintillation Counter. Professionals use it to monitor any radionuclide. For counting, they prepare vials and wipes. This device efficiently detects Sulfur-35, Carbon-14, Hydrogen-3 (Tritium) and other low-energy beta emitters.

When looking for a detector in a shop, you will most likely come across the following varieties of devices. They differ in the methods that they use to make measurements and the sensitive material that they contain.

Let us consider two devices in detail. These examples will enable you to understand the specialization of different types of detectors.

The cadmium device is highly sensitive. It can efficiently deal with two types of radiation: neutron and gamma. Environmental inspections and border guard service rely on it in their work. It allows them to localize nuclear and radioactive materials and prevent their illegal transportation across the state borders.

A compact dosimeter is used to localize and detect beta and gamma radiation. People who lack profound technical knowledge often buy such detectors to measure the radiation level in an apartment or private house that they are going to purchase. Dosimeters have large displays and do their job in around 5 seconds.

Modern devices can send the data they obtain to a computer, tablet or smartphone through the Bluetooth channel. The owner of the detector needs to download an app that will interpret the information and display it in a user-friendly way. Professionals do not need software with a simplified interface because they require more complex insights.

Classification According to the Type of Signal

Now, let us focus on what happens when the radiation enters the device and interacts with atoms of the sensitive material inside it. The radiation deposits some energy into the material, which eventually generates the signal. These are just a few examples of signals: light, hole, pulse, ion pairs in a gas and so on. Here are the three most widespread varieties of detectors that produce and process different sorts of signals.

However, the task of the detector does not boil down to only generating the signal. The device also needs to amplify it, record it and make it visible for the user.

Hopefully, this article came in handy and now you better understand the difference between the most popular types of radiation detectors. However, these were only general guidelines and not complete and exhaustive information. If you are not a professional, you should consult the vendor before buying the device.

Also, when purchasing the detector, ask the vendor about its calibration. The device might need this type of maintenance every 12 months. You should attach a sticker to it with the date of the latest calibration. A detector that was not calibrated would fail to provide you with accurate information.