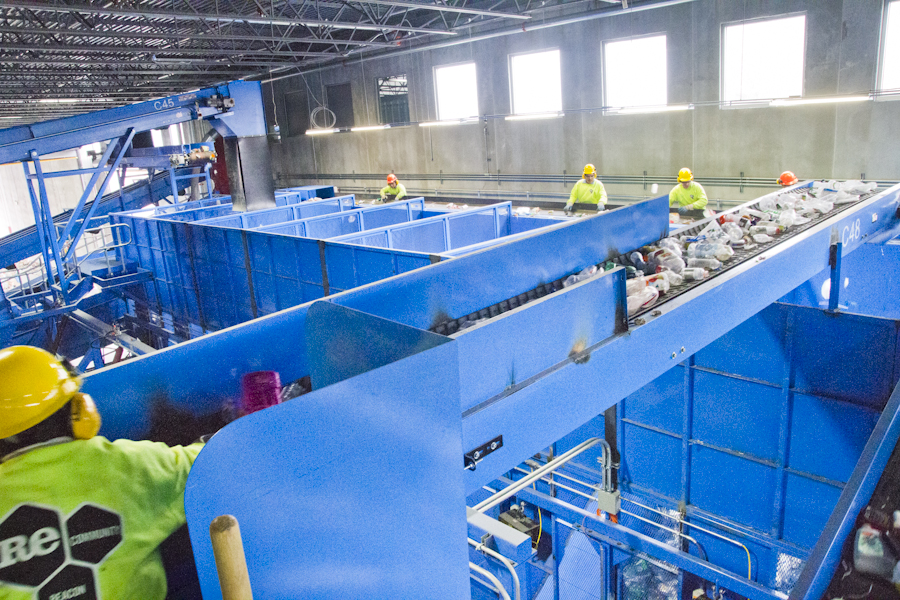 To find out, I toured the recycling plant in Greensboro, North Carolina and interviewed the city’s recycling education specialist Tori Carle.

American cities offer many different recycling methods. Greensboro and most American communities offer single stream recycling. We put all trash in one container and all recyclables in another. Some places require that the consumer sort various recyclables into separate containers.

In single stream recycling, the truck empties your garbage bin and takes everything to a materials recovery facility. There, some combination of machinery and human workers sort and bale everything.

MRFs differ in the equipment they have and the order in which specific materials are separated. These differences influence which materials each can accept.

Carle said, “Winston-Salem doesn’t accept the clamshells that your grapes and strawberries come in, the clear clamshells. But Greensboro does accept them . . . So there are minor differences between communities, but there are no major differences.”

More than one city or town may use the same MRF, along with unincorporated areas. Cities collect only residential recycling. Businesses and apartment complexes hire their own haulers to take away their recyclables—to the same MRF. The same front loader takes material from one pile or the other and deposits it into a hopper. A metering drum controls the flow of recyclables on the first of many conveyor belts.

People standing on both sides of it remove whatever can’t be allowed through the system.

Greensboro, for example, accepts large plastic items like buckets or broken play sets. They won’t fit through the sorting equipment. The presort crew removes them and puts them on a separate conveyor.

Shredded paper is recyclable, but the system can’t handle it. If you have shredded paper to recycle, put it in a plastic bag and put the bag in your recycling container. The presort crew will set it aside for transport to the baler.

But most of what the presort crew removes never belonged in the recycling container in the first place. They constantly find needles, for example, and scrap metal. Carle told me a large piece fell off a conveyor and injured a worker. “So this is the kind of stuff that if you put it in your recycling, it is endangering someone’s livelihood.”

Two materials comprise the bulk of the material that should never be put in recycling containers bound for a MRF: tanglers and Styrofoam.

Tanglers include hoses, coat hangers, and above all, plastic film (bags, etc.) MRF equipment depends on rotating machinery. Typically, the MRF must shut down several times a day so someone can climb on to the equipment and remove tanglers. Even flimsy plastic bags can break rollers and other expensive parts of the equipment.

Styrofoam, being very lightweight, breaks into small pieces and gets all over everything else.

Next everything goes through screens that separate two-dimensional items like paper and flattened cardboard boxes from three-dimensional containers.

One size star pulls cardboard out of the stream and another pulls paper. They direct these materials in two different directions, based on density.

In the Greensboro MRF, the glass falls through the machinery to a conveyor below, where it breaks. Some MRFs have glass crushers.

From this point onward, all the other processes happen simultaneously in different parts of the plant.

A magnet removes “tin cans” while an eddy current pushes aluminum cans in another direction. (This step comes first in some MRFs.) Optical scanners can distinguish PET (no. 1 in the familiar recycling triangle) from HDPE (no. 2). Bursts of air push each kind in separate directions, based on their different densities.

Greensboro’s MRF does not separate plastics numbered 3-7. It all gets baled and sold as mixed plastic.

Each material winds up on its own conveyor belt. Workers stand on each side of it manually pulling specific things off.

On the paper conveyors, some people pull out high-quality office paper while others remove chipboard. On the plastic conveyors, people separate undyed HDPE like milk jugs from colored HDPE like detergent bottles.

Some look for contamination of two kinds:

Carle explained that the first kind of contamination gets routed to the proper place in the plant. Workers put the second kind in trash cans. It goes to the landfill.

Once a certain amount of a specific material has accumulated, it gets pushed on to a final conveyor belt. In the end, it gets compacted into bales and tied with baling wire. It becomes, in other words, the product that the MRF sells to other companies for further processing.

You may have read about quantities of recyclables exported to Third World countries – even that what you put out for recycling ends up in the landfill.

In either case, that material has not come through a pure play recycling facility.

Carle said, “If ReCommunity were to spend all of their time processing these materials and baling them up, they would be losing money by sending them to the landfill, because they would have to pay to dump it at the landfill. I promise they’re not sending anything to the landfill that they can sell.”

ReCommunity sells its output mostly to nearby companies. For instance, a facility in Reidsville, North Carolina buys plastics. One in Wilson, North Carolina buys glass. Each of these companies process material to make it into a form manufacturers can use for new products. According to Carle, recycling creates more jobs than landfills.

Some MRFs rely more on automation than Greensboro’s. Some rely more on human labor. Depending on who owns them, they have different practices when it comes to selling finished bales. But the basic process is the same everywhere.

David Guion
David Guion is a retired academic librarian with a distinguished record of publication. He participated in the first Earth Day (1970) and has been dedicated to an environmentally friendly lifestyle ever since. When he later served on a university sustainability committee, he learned what large institutions can do for the environment. He also noticed that individual households can do the many of the same kinds of things on a smaller scale. He puts his research and writing skills to work publishing the respected blog Sustaining Our World to get the word out. Follow him on Twitter @ecofhp. Contact him at david@sustainingourworld.com

16 thoughts on “Everything You Should Know About Materials Recovery Facility”