Black Friday shopping has become an ingrained part of American culture. It’s considered the kick-off to the holiday shopping season, and people brave the cold and massive crowds to get great deals. Along with the shopping element, a lot of people think it’s a fun way to spend time with family and friends the day after Thanksgiving or sometimes even the day of.

However, large crowds pose safety risks, and that includes the crowds that gather for doorbuster sales and the like on Black Friday.

Along with the risks of large crowds, there are other safety considerations to keep in mind during this major shopping day.

The following are some of the most important things you should know about Black Friday safety.

It can sound crazy to someone who’s never experienced it, but sometimes one of the risks of Black Friday shopping can be the potential for a stampede to occur.

In 2013, a Walmart employee was trampled and crushed to death by shoppers who wanted to score a deal on a flat-screen TV. At the same time, four other people were injured, and that included a pregnant woman. She ultimately miscarried because of her injuries.

As a result of that terrible incident, Walmart and other retailers have put in place more stringent security for Black Friday shopping, but is that enough?

According to Harvard researchers, when people are packed closely together and with enough density, they lose control over how they run into other people. That means more collisions and pressure overall. In high-density situations, researchers also found people move toward what’s described as a common point of interest.

That then creates the highest pressure.

So, what does this mean in terms of shopping?

The closer you might be that low-priced flat-screen TV, the more likely you are to be crushed or injured.

If you’re in a situation where you feel like there could be a stampede, what should you do? 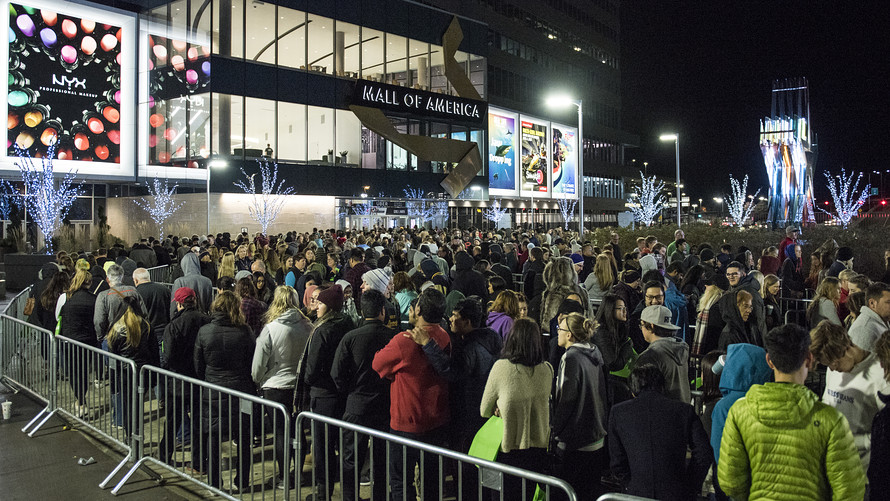 If you’re in any situation where there’s a lot of densely packed people, you want to make sure you have an eye on the exits ahead of time. If some sort of stampede appears to be happening, you should try to find an area where you can take cover or climb up higher to avoid the crowd’s force.

If you can’t take cover, keep moving rather than trying to resist the crowd’s force.

Try to avoid what is called choke points as well, which are areas that slow the stampede’s flow, such as hallways and doorways.

Beyond possible issues with trampling and human stampedes, what else should you know about Black Friday safety?

First, park as close to the building you’re going to shop in as you can to avoid the risk of theft. Thieves tend to be looking for targets around the holidays.

When you’re parking, try to park in a well-lit area and make sure you lock your vehicle and keep any purchases out of sight. Keep a close eye on your children in parking lots as well, because frenzied shoppers may not be on high-alert.

Assaults may be more common, unfortunately, during the holiday season. People may be trying to locate an item they want, and it can lead to high tempers and the potential of violence. There have been some stores where riots have occurred on Black Friday.

Never fight over an item, and try to keep your temper under control. If someone tries to engage you in an angry way, don’t engage with them

If you do feel like someone is threatening your personal safety, try to find a member of security. There should be plenty of security people in stores that are having Black Friday sales.

Black Friday is a time when the weather is cold in most parts of the country, and that can contribute to additional safety risks. For example, the sidewalks may be wet, icy, or snowy and that may mean stores have wet interior floors.

If there are large crowds in a store, slip and fall accidents become even more likely.

Finally, even if you’re not venturing out to do your shopping, but you’re doing online shopping on Cyber Monday, there are steps you can take to protect yourself as well. For example, keep an eye on all of your credit card transactions during the holiday season and make sure none of them are fraudulent.

You should only shop on trusted sites that are secure and offer secure checkout.

Black Friday can be a lot of fun during a festive time of year, but it’s important to be vigilant about your personal and financial safety as well.