Seagrass, an aquatic plant, which is found on the seabed floor in shallow waters, is able to store carbon 35 times faster than tropical rainforests!!. But the bad news is that seagrass is seriously threatened by polluted waters and poor marine practices. Yet it is a critical ecosystem that provides ideal breeding grounds for small fishes and ample feeding grounds for many marine species including sea turtles. 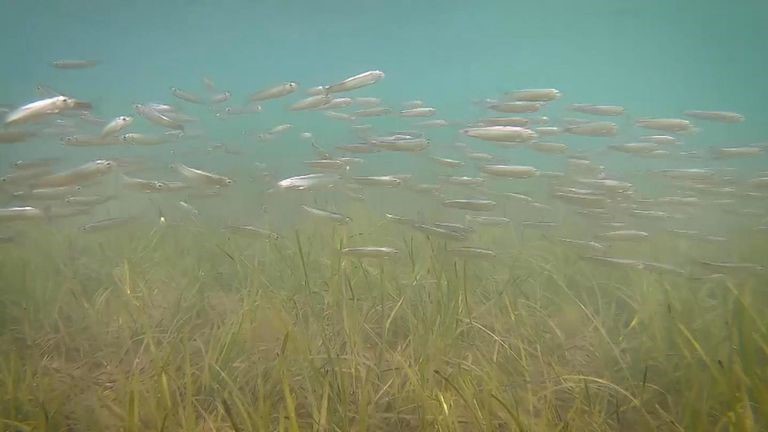 The environmental community has been very quick to claim the power of forests as significant carbon sinks on our planet earth. This storage capacity is a powerful way to keep a check on climate change and mitigate against the harmful effects of advancing climate change. But that has been at the expense of ignoring other carbon sink ecosystems that also contribute to storing carbon and managing checks and balances on climate change.

The coastal ecosystems store large amounts of carbon, especially in the seagrass beds that cover many coastal shallow water regions. These are referred to as  the ‘blue carbon’ storage systems. Organic carbon stored in tidal salt marshes and mangroves have been estimated, as well as in the seagrass beds.

Seagrass is a vital carbon sink in the marine environment.  It is able to store per unit area, significantly more carbon than forest ecosystems. This is very encouraging and positive news however, the seagrass ecosystems are vulnerable to depletion of the plant materials due to the impact of polluted waters, trawling fishing methods and excessive dredging practice, as stated in an article in Nature Geoscience in 2012. The coastal ecosystems that include seagrass beds have the potential to become essential blue carbon’ stores that will be essential in helping to combat climate change.

Seagrass ecosystems or ‘beds’ are able to store up to 83,000 tons if carbon per square kilometer. In contrast to this very large capacity, forests are measured as storing 30,000 tons of carbon over a similar area. Although seagrass beds are in limited marine environments, they still account for 10 percent of all carbon sequestered annually in the marine environment.

According to this research paper, seagrass beds store twice as much carbon as forests over the same unit area. The seagrass is able to store the carbon both in the plant material, in the plant root materials as well as in the sandy sea beds in which the plants exist.

In addition to carbon sequestering capabilities, the seagrass beds are rich ecosystems providing a food source for many fish species and large marine animals such as turtles, The seagrasses also filter the waters of sediment, provide breeding grounds for small fish species and habitats for a wide variety of marine species. Therefore, restoration of these ecosystems provides for a very sustainable and viable marine environment.

Seagrass as a Tool for Fighting Climate Change

British scientists believe that by collecting seagrass seeds and juvenile plants for replanting could be one solution for combating climate change. The vision is to collect seeds and replant to re-establish seagrass ecosystems. The project initiated by Swansea University scientists aims to collect one million seeds and germinate this in the laboratory for later planting as juvenile seedlings in the coastal waters around Wales.

The World Wildlife Fund (WWF) considers this action could have a significant impact on the globe in mitigating the destruction of natural ecosystems that typically capture and store carbon such as the tropical rainforest, which have recently been subjected to massive destruction by wildfires ravaging the Brazilian forests.

Swansea University scientists have initiated a project to evaluate the effectiveness of replanting juvenile seagrass plants. Seagrass is known for capturing carbon and storing it in the plant material.

Across the globe, seagrass ecosystems are vulnerable especially to aggressive trawling methods conducted by the fishing industry. Seagrass is critical in providing protection as well as essential source of foods for marine species. Globally, the plant also acts as a storage of carbon which is of great importance in the current concerns about the rapid climate change processes.

However, polluted marine waters are threatening this marine plant species in various regions across the globe. Also, poor marine practices such as dredging and sea floor trawling both threaten seagrass beds.

1 thought on “Seagrass: An Important Factor in Climate Change Mitigation”