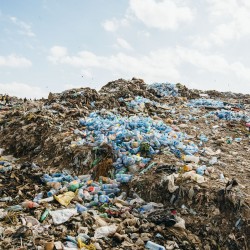 Africa, the continent with the least commitment to creating an environmental haven still hangs with an ongoing debate on plastic bags. This running debate circles around whether or not to ban plastics on the entire continent. For this to happen, it would take 54 different governments to pass a plastic bag bill in each of the African countries they govern.

So far, 10 out of the 54 countries have banned plastic bags. Rwanda set the pace in 2008 with their plastic ban bill being the first on the continent. Kenya was the 10th African country to follow suit as they brought the world’s toughest plastic bag ban – Kenyans producing, selling or even using plastic bags will risk fines of $40,000 or imprisonment of up to four years.

“If we continue like this, by 2050, we will have more plastic in the ocean than fish”

Habib El-Habr, an expert on marine litter working with the UN environment programme in Kenya warned with an attempt to convince all other African countries to follow his country’s footsteps.

However, it’s still unclear what the other 44 other nations stand for entirely. The concerns that come with fully implementing the use of Paper bags in African Countries are numerous. They range from illegal trade in black market bags, reduced sales, lack of support from businesses, all right to deforestation activities caused by manufacturing paper bags.

However are these and other reasons that stand to justify the use of plastic bans also worthy back the scourge of plastic pollution in Africa?

Rwanda’s Minister of Natural Resources, Vincent Biruta, who sides with the view on banning plastics made a strong statement:

“My government took the decision for litter, pollution of water bodies, and pollution of soil. That decision was taken, it has created challenges in terms of packaging but it has also created opportunities”

Regardless of his views, the debate still stands strong.

Here’s a look at the factors considered in regards to plastic bag and paper bag use in African countries.

If there was a fully and efficiently enforced set ban on plastic, it would take a while to factor easy access to already existing plastics.

Paper bags generally hold more products per bag even as high as 50 percent to 400 percent more, depending on how they are packed. This is simply because paper bags are sturdier thus they have the capability to hold more volume when compared.

Where does paper come from? – Trees, lots and lot trees. That’s a lot of deforestation if a nation is focused on being “environmentally” friendly.  But that’s not all that goes into paper bag production that affects the environment. Actually, the entire process of getting that paper bag to a grocery store usually has a huge toll on the planet.

The entire process starts with ‘clear cutting’ which is very detrimental to natural habitats. The process also contributes to ecological damage in its fair share.

Next process involves a whole lot of machinery to clear logs from the old forest. This is done with the use of logging trucks and in some instances helicopters when the area is quite inaccessible. The machines that are used require a tremendous amount of fossil fuel to operate thus, the environment is affected indirectly.

Whenever this process is done unsustainably, logging even small areas tend to create a  large impact on the entire ecological chain in its surrounding areas.

Usually, plastic bags are typically made from oil, a non-renewable resource. Considering plastics are a by-product of the oil refining process with about 4% of oil production worldwide.

Electricity is the biggest energy input to the production process, with a great number of producers relying on coal-burning power plants. Considering it needs enough power to heat up to about 750 degrees Fahrenheit, where there is a separation of its various components and molded into polymers.

The entire process leads to using one of the five types of polymers (polyethylene) in its low-density form – LDPE. LDPE is also known as #4 plastic.

Trees are renewable resources however when the production rate is high, it gets hard to keep replanting rates up to par with the felling of trees.

It gets even hard to choose when research estimates that there’s a growing percentage of recycling (currently at 20%) occurring for plastics worldwide.

What are Biodegradable plastic bags?

These are plastic made from biopolymers like Polylactide (PLA) and Polyhydroxyalkanoate (PHA) which are completely biodegradable in compost. They are entirely not made from petroleum products but are usually derived from food sources. Corn is currently the primary food stock for bioplastics.

To truly consider which of these would be more favorable, the location has to be considered also. The positives and negatives have to be evaluated accordingly to see which would actually be befitting for each African country. It would be outright wrong for countries to follow the 10 countries that have passed the plastic ban without actually analyzing how it can more beneficial.

Depending on your African Country, which would be more befitting for use – Plastic or Paper Bags?

Manny Obeng is a Ghanaian raised writer with high hopes that his written work would serve its quota in making a world a better place, especially in Africa. With his love for creating written content, he regularly writes when he’s not working with his team – Team Exhort on the best place to post job ads Ghana and Africa

4 thoughts on “The Debate on Banning Plastic Bags in Africa”