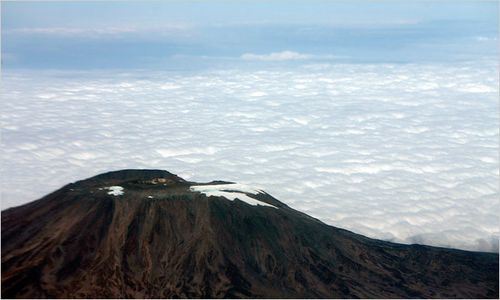 Earth’s climate has always been affected by a range of natural factors. It is known to have changed significantly during recorded history, even before gaseous emissions from human activity could have posed any significant threat to atmospheric or climatic conditions. Natural climate variability can arise from natural forcing mechanism which includes both internal oscillations and external forcing like solar variations, volcanic eruptions and aerosols. It can be generated internally through interactions within and between the different climate subsystems such as atmosphere, ocean, land, sea ice, glaciers, and biogeochemistry.

There is a complex interaction between the two components of climate; the climate variation and change in atmospheric and/or the oceanic circulation pattern. These interactions result in shift in the temperature and precipitation probability distribution functions (PDFs) towards a wetter/drier/warmer/cooler conditions.

Both effects magnify the changes in the probability of extreme events on the tails of the distribution. They are due to distinctive spatial pattern(s) that may be characterized by one or several modes (repeating patterns of time space variability) of the climate system.

Within the Earth’s atmosphere-ocean system, the variability of primary climate variables (e.g., pressure, temperature, and precipitation) gives rise to an array of important, naturally occurring dynamical modes. Some of these modes are the North Atlantic Oscillation (NAO), the Arctic Oscillation (AO) and its Southern Hemisphere counterpart, the Antarctic Oscillation (AO, also known as the northern and southern annular modes, respectively), the El Niño-Southern Oscillation (ENSO), and the Pacific Decadal Oscillation (PDO).

The climate system can also be externally forced such as anthropogenic changes in greenhouse gases. Any changes in the radiative balance of the earth, whether due to human-induced increased concentrations of greenhouse gases tend to alter atmospheric and oceanic temperatures, their associated circulation and hence the weather patterns. These changes are accompanied by changes in the distribution and amount of clouds, precipitation and evaporation.

The long period of drought which was experienced in South East Queensland (SEQ) was due to cold state of the tropical east of the Pacific Ocean. The ENSO was asymmetric in the multi-decadal scale until 1980 and then there was breakdown on the asymmetric ENSO teleconnection when the SEQ region had a period of heavy rain fall associated with La Nina episodic oscillation.  Post 1980 rainfall period was the positive phase of inter-decadal Pacific oscillation (IPO), where there was an eastward shift of the Walker circulation.

This resulted in the shift of La Nina movement to the west, which again resulted in reduced rainfall. SEQ region continue to experiencing another breakdown of the ENSO teleconnection in the last three years since IPO has been in another negative phase.  La Nina events bring above average rainfall to the inland tropics and northern Australian region. This also raises the night time temperature and tropical cyclone risks.

As global temperatures rise due to increased greenhouse gases, the mean Pacific climate tend to resemble more like an El Niño–like state with greater relative surface warming in the equatorial eastern Pacific than the west.

There are lots of uncertainties involved in climatic models in relating ENSO’s response to global warming. It is still a long way to go before we have a clear idea about the interaction between ENSO and anthropogenic interference. That’s why at this stage we cannot establish the strong relationship between temperature rise due to GHG and the extreme weather events, such as Storm Alexa in the Middle East or Hurricane Harvey in the United States.

7 thoughts on “Everything You Need to Know About Climate Variability”