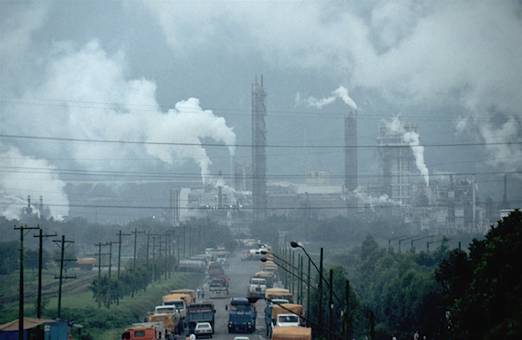 The human emissions of water vapour are not considered to have altered its effect. Hence, it is not regarded as an anthropogenic greenhouse gas. The six major types of anthropogenic greenhouse gases (listed in Annex A of the Kyoto Protocol) are: carbon dioxide (CO2); methane (CH4); methane (CH4); nitrous oxide (N2O); hydroflurocarbon (HFCs); perflurocarbons (PFCs) and sulphur hexafluoride (SF6)

Under ideal conditions the global energy balance is in equilibrium, i.e. 342 Wm-2 incoming solar radiation is balanced by 235 Wm-2 of outgoing long wave and 107 Wm-2 of reflected solar radiation. Disruption of this system causes global warming or cooling.

Emissions of different greenhouse gases have different effects on climate change due to the difference in the parts of infrared spectrum that they interact with and also due to the duration of their presence in the atmosphere. Some gases persist in the atmosphere for extremely long period of time and continue have effect on it. For example, while bulk of CO2 from fossil fuels will be removed in several centuries, about 25% will continue to affect the atmosphere for many thousand years.

To account for different effects of greenhouse gases in a single measurement, the Kyoto Protocol uses a unit known as “carbon dioxide equivalent” (CO2 –e or CO2-eq). This term is used in two different ways to provide a single metric, both for greenhouse gas emissions (in tonnes of CO2-e) and the greenhouse gas concentration in the atmosphere (in ppm CO2-e).

When used in the context of greenhouse gas emissions, it refers to the amount of CO2 that would give the same warming effect as the effect of the greenhouse gas or greenhouse gases being emitted over a given timeframe. Generally, 100 years is the standard time timeframe that is used.

In reality, it is very difficult to conceptualize precisely what a “tonne of carbon dioxide” or other greenhouse gas is as many people are not familiar with the nature of greenhouse gases in a technical sense and they are invisible to human years. For example, CO2 is a colourless and odourless gas, which cannot be perceived through direct senses. Furthermore, since the volume occupied by a gas varies with temperature and pressure, at sea level and 25 0C, one tonne (1000 kg) of pure CO2 occupies 556.2 m3 of space, which is equivalent to an invisible cube slightly larger than 8m8mx8m.

In an attempt to turn greenhouse gases into something visual, tangible, and measureable for the public, the Victorian government have used the analogy of ‘Black Balloons” escaping into the atmosphere as a visual image for greenhouse gases in major campaign for energy efficiency to reduce greenhouse gas emissions. The advertisements show electrical appliances producing black balloons, each of which represents 50g of greenhouse gas, floating up from houses into the sky.

23 thoughts on “An Introduction to Greenhouse Gases”